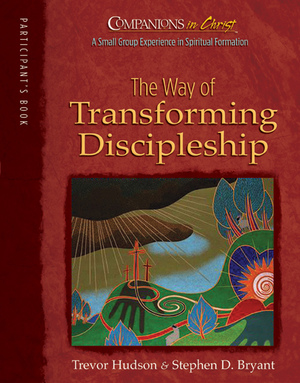 The Way of Transforming Discipleship Leader's Guide is also available.

Are you becoming the person God wants you to be? Discover a way to authentic Christian spirituality through this 6-week study. By shining the light of God's Word into the darkness of our lives, Hudson and Bryant will lead you to a pathway of discovery and growth. Explore the markers of the journey:

"The Upper Room has crafted a practical tool for assisting pilgrims on the journey of transformation," writes one reviewer. "The Way of Transforming Discipleship is for anyone who is on the way to becoming a true Christ-follower. Not only is this a must-read, but even more so, it is a must-do resource!" Join this journey to experience more deeply what it means to live as a follower of Christ. Understand the meaning of spiritual formation and how it leads to a spirituality that's authentic and grace-filled. Reflect on what your faith means in terms of who you are, how you must change, how you deal with pain, and how you relate to others. Be challenged to live the whole gospel by authentically connecting spirituality with discipleship.

A group experience of this resource consists of a preparatory meeting, 5 weekly sessions, and a closing retreat. The Way of Transforming Discipleship is appropriate for any group that has completed the Companions in Christ 28-week foundational resource, or it may also be used as an introduction to this powerful program.

Rev. Trevor Hudson has been part of the Methodist movement in Southern Africa for more than 40 years. Serving primarily around Johannesburg, South Africa, he is deeply committed to the work and ministry of the local congregation. In addition to preaching and teaching on a regular basis in South Africa, he is also involved with the Institute for Creative Conversation and the Jesuit Institute of South Africa. A significant part of his weekly work is giving the Spiritual Exercises of St. Ignatius. Besides his local commitments, Trevor travels widely, preaching, teaching, and lecturing in the areas of spiritual formation, spiritual direction, and pastoral therapy. In the USA he lectures at Fuller Seminary and Gardner-Webb University in their Doctor of Ministry programs, the Next Frontiers Program for Ministers, the Renovare International Institute for Christian Spiritual Formation, and the Dallas Willard Center for Spiritual Formation at Westmont College. Trevor is the author of over 20 books, including the Pauses series (Pauses for Advent, Pauses for Lent, and Pauses for Pentecost) with Upper Room Books. Trevor is married to Debbie, and they are the parents of two adult children, Joni and Mark.

Stephen D. Bryant was the world editor and publisher of Upper Room Ministries from 1997 to 2009 and is currently directing international ministry initiatives for the General Board of Discipleship. Before his election as world editor and publisher, Bryant served as director of spiritual formation for The Upper Room and as the international director of The Walk to Emmaus and Chrysalis movements. His vision of small groups as important settings for spiritual formation and his experience in the contemplative life as well as local churches provided the inspiration for the Companions in Christ series. Bryant was instrumental in shaping the foundational 28-week resource.

"There is power in The Way of Transforming Discipleship. Enter into this journey with expectation and excitement. This is an exciting pathway to transformation and growth in discipleship."